Yesterday, Neo and Vee joined Nengi to secure a spot in the BBNaija finals and a man has slammed housemates for letting Neo Vee play Bonnie & Clyde with their destinies.

They each earned a spot in the finale after they escaped nomination for eviction this week.

Recall Nengi won this week’s head of house game and emerged the ultimate HoH with no deputy, this gave her an automatic ticket to the finals.

In a surprise process for nominating housemates for possible eviction, the housemates were divided into two teams; white and black.

Each team was asked to choose two housemates each to be up for possible eviction on Sunday.

After submitting their names, Trikytee, Dorathy, Laycon and Ozo were put up for possible eviction.

A twitter user with username @TheYomiKazeem reacting to the news tweeted:

“These housemates are super silly for letting Neo and Vee play Bonnie & Clyde with their destinies.

You’re there hustling for N85m, two people are playing Love Is Blind and you’re letting them?” 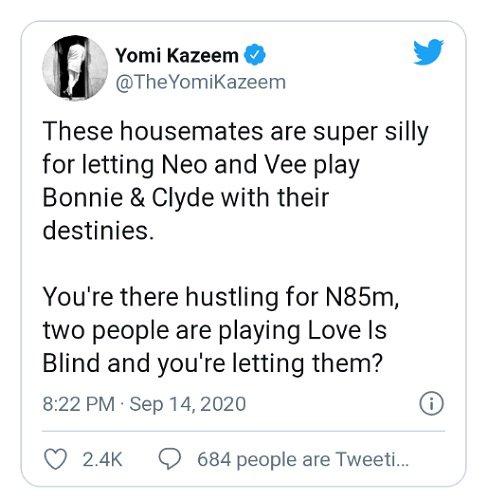